Getting to Zambia from Spain is by no means an easy trip. It’s a long flight, with various stages, with a final destination that’s off the beaten track, even for experienced travellers.

Lusaka, the capital welcomes you with all of the bustle and energy characteristic of a big African city. It feels almost as if, despite the hardships and poverty faced by its inhabitants, life is valued somehow more; and lived with a vibrancy uncommon in the old world of Europe, or the world’s other metropolises.

That’s the Africa that opens up to you as soon as you leave the airport. The colours, the smells, the sense that some elemental truth lives wherever you direct your gaze.

Once out of the capital, another long journey by jeep takes us to one of the planet’s great natural paradises: the South Luangwa National Park, or ‘The Valley of the Leopard’.

South Luangwa is not only a paradise for the animals who call it home, but also for those humans lucky enough to visit. Stretching for more than 9,000km2, the park has one of the highest densities of animal life on the continent, and is possibly the best place on Earth to easily spot the leopard. Which is saying something, as leopards are notoriously reticent animals. 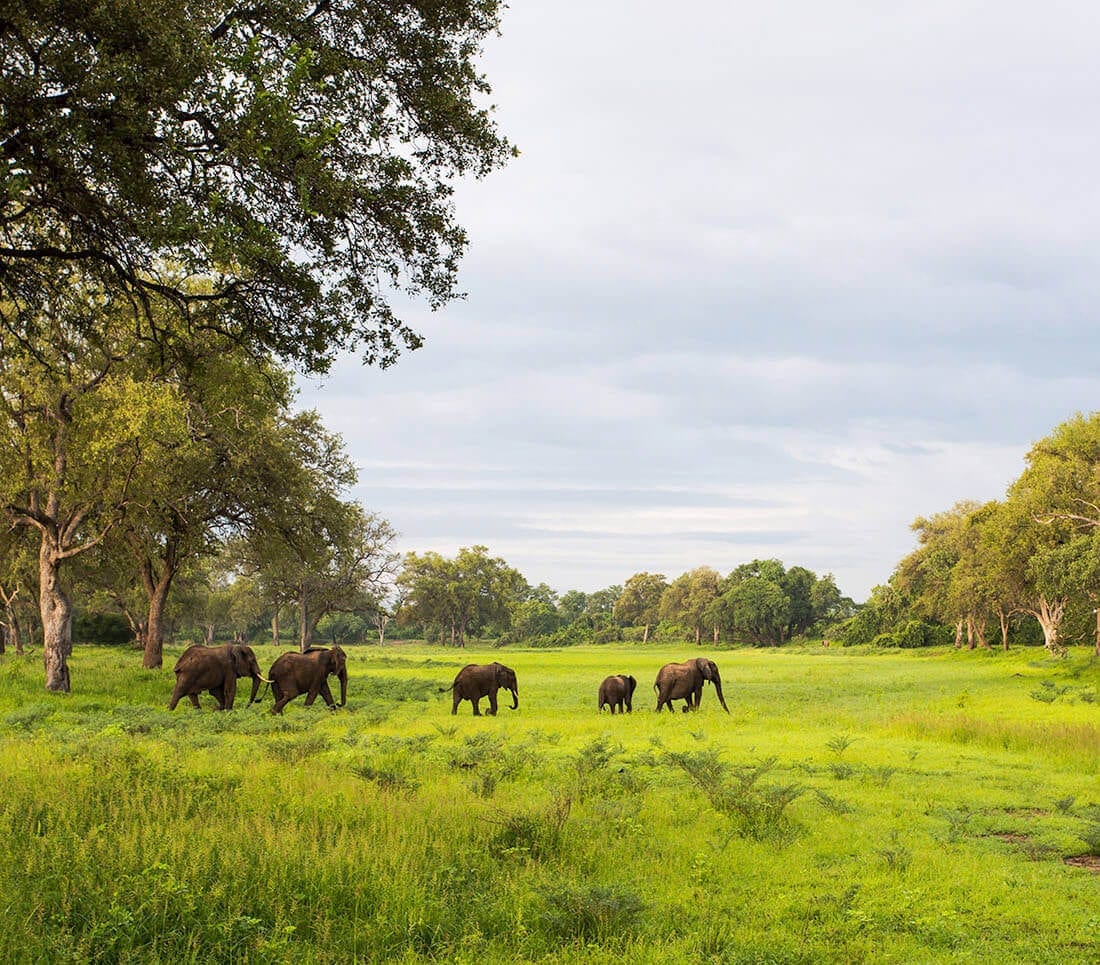 This was my primary reason for having come all this way. I was no stranger to Africa, having already visited several countries; among them Gabón, where I’d seen humpback whales frolic like dolphins off the coast, before watching troops of lowland gorillas in the humid jungles of the interior, and South Africa, where I swam with sharks, and had seen most of the ‘big five’ many times over. But so far, except for one sighting from a distance on the Serengeti many years previously, I was still to see a leopard. I needed to see them close by, to study their movements, their svelte and graceful bodies and their piercing stares.

By nightfall we’d arrived at a well appointed campsite on the edge of the park. In only a few hours time, I’d be entering the most densely populated leopard habitat in Africa.

Today was the day. We awoke in the pre-dawn cold, full of excitement for the day ahead. Slowly, the sun rose on a perfect day. We were in the dry season, when barely a cloud stains the perfect blue of the African sky, and where the sun rules over the land below without respite.

After a light breakfast, we climbed into the 4×4 that would take us to the entrance to the park. Once our paperwork had been checked, we were given the all clear, and set off into the reserve.

After so long waiting, I was more than prepared for anything we might see, armed with a brand new camera, that I’d bought a few days beforehand.

Even before we’d crossed the bridge that leads to the park, we stopped the jeep to watch a pair of magnificent Osprey, circling overhead. It was as if they were welcoming us into their sanctuary. Because that’s what South Luangwa is – a sanctuary, where human visitors are the privileged guests.

Of course, the osprey were just the beginning of the many animals we’d see. Almost immediately we came across a river filled with  imposing hippopotami, along with the many sized birds who rest on their heads and backs, picking them clean of insects in a wonderful example of inter-species symbiosis.

And then, a wonderful pride of lions; buffalo, kudu, and elephants who lumbered across the path in front of us. All without mentioning the amusing warthogs, who amble across the dusty plains, and of course the giraffe of various ages who are everywhere to be seen in this part of Africa.

But as stunning as all of these animals are, I was here for a reason. I was here to see leopards, in my mind the most beautiful creature in all of Africa. 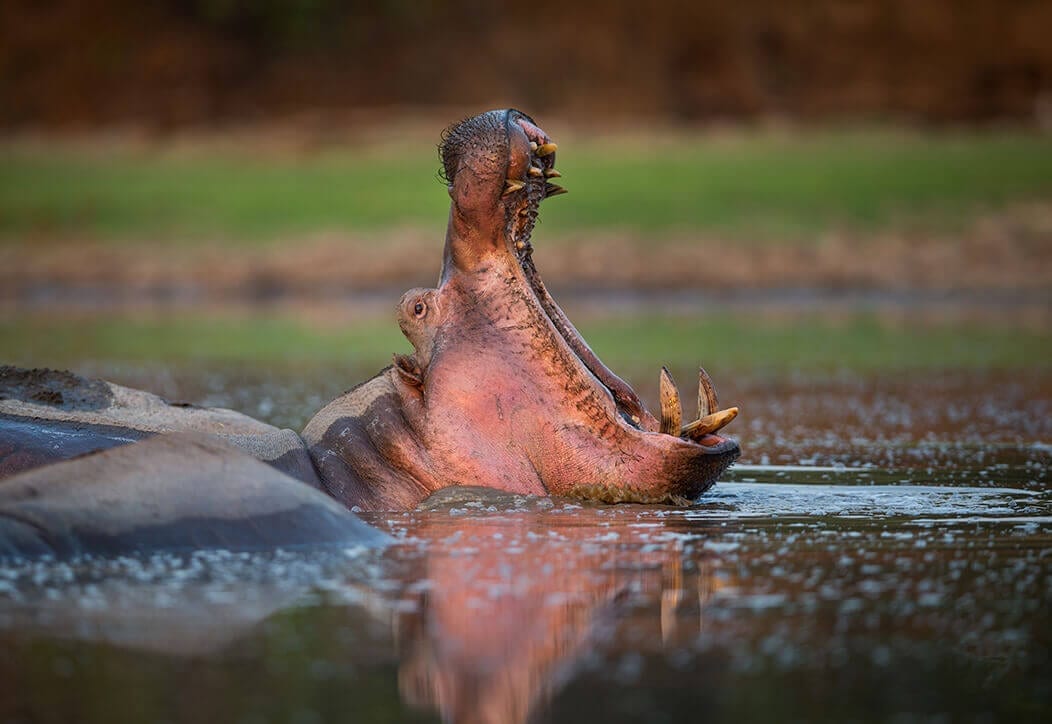 After following a steep and winding path in our 4×4,  we had arrived at a wide area of flatland, divided down the center by a deep ditch. Our guide caught our attention. He’d spotted something moving in the trench. Of course it could have been anything – a wild dog or a hyena, even a lion. It can’t be that easy, I thought to myself.

That was when, gradually, a head peeked over the edge of the ditch. Any doubts were now dispelled from my mind. There in front of us was a magnificent female leopard, every bit as majestic, elegant and beautiful as I could have imagined. She was sizing up the situation. No more than 100 meters from where she was, a small antelope was grazing on some of the small patches of dried grass remaining in the area, blissfully unaware.

The setting was perfect: a wide flatland, without obstacles, and a perfect vantage point for the big cat from where she couldn’t be spotted. And us, human observers, from our vehicle converted into the perfect hide, from which to watch the show. Once again, we were watching the circle of life take its course. It might be cruel to the prey, but fair and necessary in the greater scheme of things. The law of nature.

The leopard started moving, stealthily, to get as close as possible to its prey. The antelope continued grazing, oblivious to the threat it was facing. Suddenly, with a giant leap, the leopard left its hiding spot. The antelope turned, and for a moment, both creatures locked gazes. For me, this was the moment of a lifetime, the missing  ‘stamp in my collection’, that i’d been searching for ever since I was a boy, watching nature documentaries with my father. I was finally there, feeling the emotion of being present in nature in all its splendour. The leopard started its run towards the antelope, and the antelope in turn started to run for its life.

It’s ironic to think of it, but in this situation, the hunter is also fighting for their life. If they don’t catch their prey, they risk dying of hunger. In nature, nothing comes for free, and every creature has to fend for themselves.

The antelope escaped. Either thanks to an error on the part of the leopard, or a wiley leap from the deer, the animal managed to get away.

Back in the jeep, our party was relieved for the animal that had managed to stay alive – although who knows for how long? days or hours… At the same time, we could help feeling a pang of sorrow for that female leopard, who had missed her prey, and who we discovered after following her, had three little mouths to feed.

Who knows what happened next? Perhaps, if her next attempt at hunting failed, one of her cubs would die. In Africa, the weak isn’t always the least physically strong.

My first leopard. It wouldn’t be the last, and I’m sure there will be more to come. Africa always calls on you to return. Just like that leopard. to try again and again. 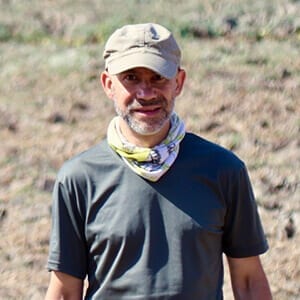 Just someone curious who likes travel, cinema, wildlife photography and, one day, will play the uke properly!!