In December of 2004, Mikel and I decided to spend New Year’s Eve in Indonesia. It was a decision that proved to be even more rewarding than I could have imagined, with sights and experiences that I’ve never forgotten.

Nestled between the Pacific and Indian Oceans, Indonesia is the world’s largest archipelago, made up of 17,000 islands that act as a bridge between two continents – Asia and Oceania. The main islands are Sumatra, Java, Bali,  Sulawesi, Borneo and Papua, or in the local tongue Irian Jaya.

Our journey took in four of the main islands over three weeks.

We set off from Madrid on a 15 hour flight to the country’s capital, Jakarta, situated on the island of Java. As we drove from the airport to our hotel, I was struck by how the city reminded me of Mexico City, with its large open boulevards, shopping centres and the relentless bustle of people and traffic.

The Temples of Java

Our first excursion of the trip took us 40km out of Jakarta to Yogyakarta, home to the twin temple complex of Prambanan and Borobudur, dedicated to hinduism and buddhism respectively.

Prambanan is the most important Hindu site on Java. Constructed between the 7th and 10th centuries, the complex contains temples dedicated to Shiva, Brahma and Vishnu.

Close by is the spectacular complex of Borobudur. Made up of 3 large structures – the larger and most important Borobudur and the smaller Chandi Pawon and Chandi Mendut –  this monastery and a site of pilgrimage stretches for a kilometre. In 1991 it was declared a world heritage site, and is today the most visited monument in Indonesia. Borneo’s orangutans. An experience in itself.

The next island on our itinerary was Borneo, the third largest island in the world, and one of few places on Earth where you can observe orangutans in their natural habitat. These magnificent creatures share 98% of their DNA with humans, and it’s no surprise that their name in Malay – Orang-hutan- literally means ‘Man of the forest’.

To reach the habitat of the orangutan, we boarded a traditional indonesian river barge or ‘klotok’ which took us deep into the jungle of the Tanjung Puting National Park, which is irrigated by the Kumai and Sekonyer rivers. Our journey up-river was anything but uneventful, with a chance to see one of the most unique species on the planet: The proboscis monkey. These simians, native to Borneo, are famed for their bulbous, elongated noses, that serve a unique evolutionary purpose. When excited or angry, their noses change colour from orange to bright red as a sign of virility.

After a few hours on the river, we finally reached our destination. We docked at a wooden platform on the banks, and set off into the jungle to search for the orangutan

I’ll never forget my first sighting. As we made our way along the path, we sighted a female with her two infants walking through the jungle. My heart was in my mouth! This was the first time I’d seen a great ape in its natural habitat: free, calm and stunning. The park rangers called them closer, imitating their cry, and they approached, coming to feed from a wooden platform where they’d laid out mangoes and bananas. From here I watched them feed, admiring their lustrous red coats. 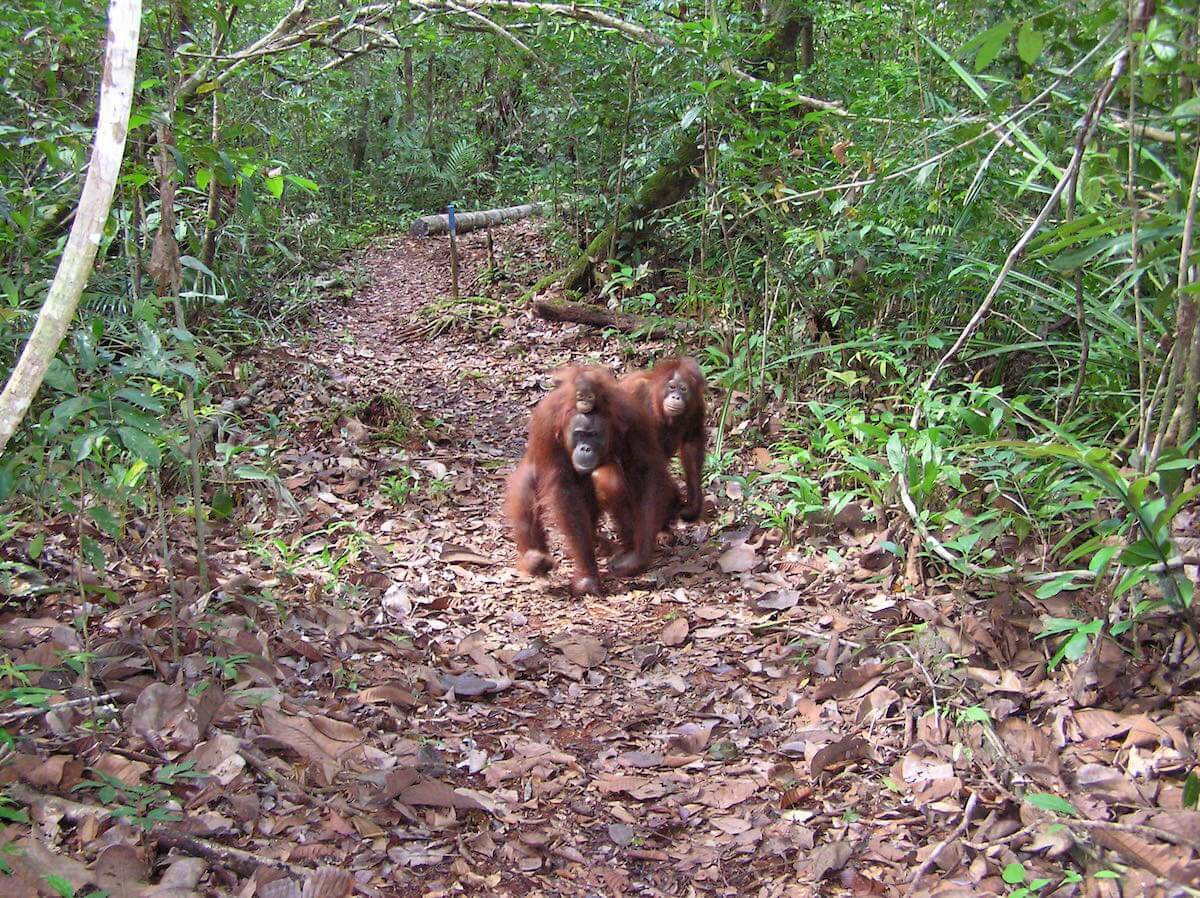 Continuing into the jungle, it began to rain, and suddenly we came across two, enormous males, side by side. I was speechless with admiration.

Over the next few days, we navigated further into the jungle, moving via klotok, which was also our home for the journey. By day we fished and swam in the river, and at night we stretched out, listening to the sounds of nature all around us. 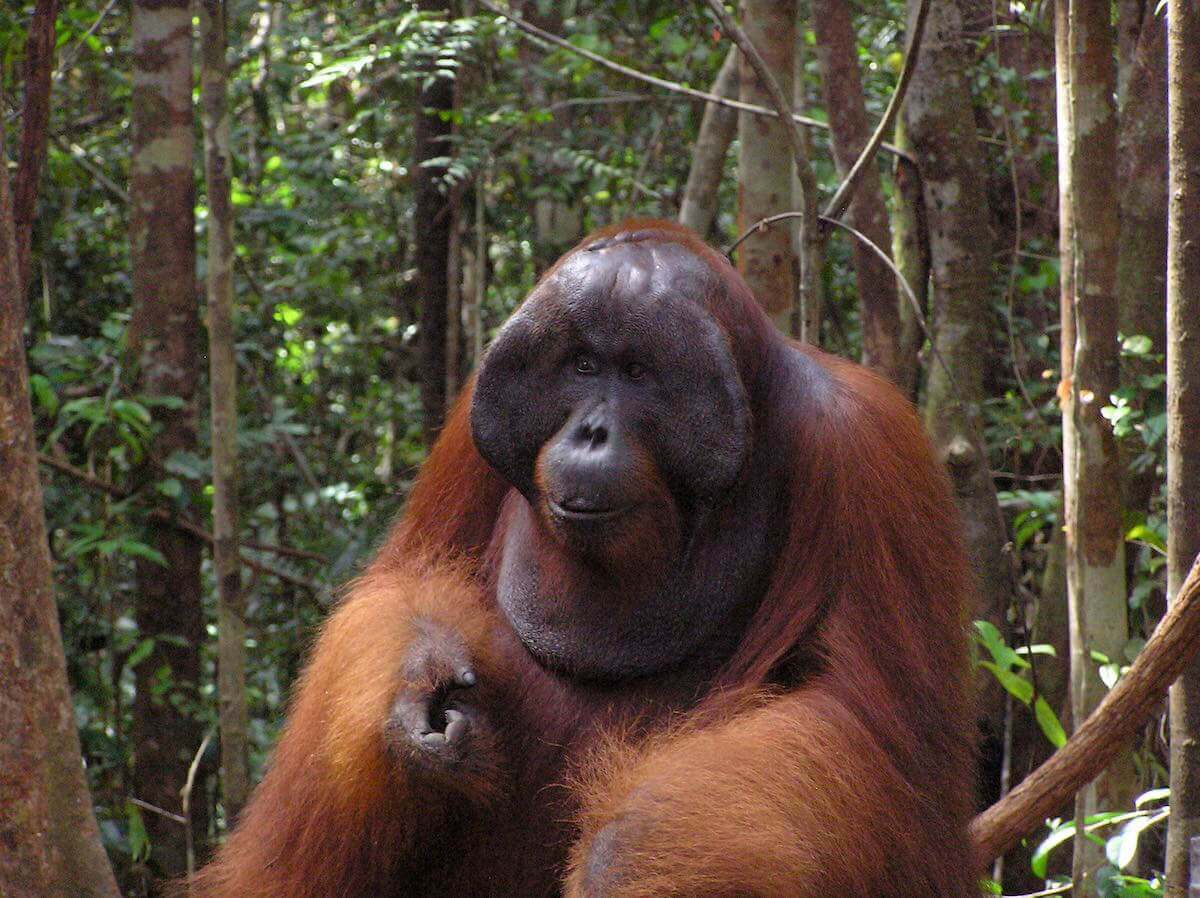 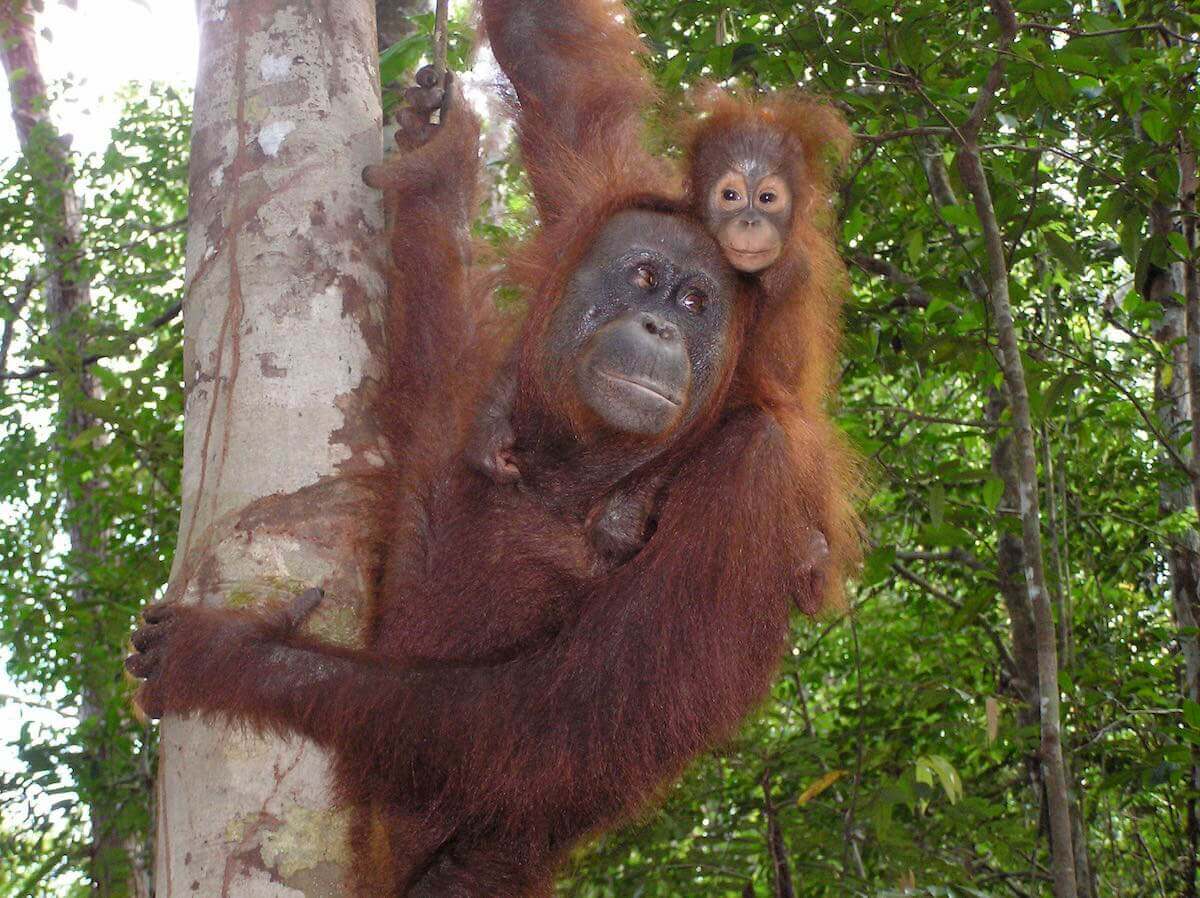 Trekking with tribesmen in Iran Jaya.

From Borneo, we flew to our next destination, Iran Jaya or Western Papua. The flight was comparatively long – 7 hours, with a stop in Sulawesi where we met our guide – Nanang. Upon finally landing in the capital, Jayapura, we picked up our luggage and set off immediately via jeep to the village from where we’d begin our trek through the Bailem valley.

The village was inhabited by members of the Dani tribe, a friendly people who lived in circular huts made of wood with conical thatched roofs that they built by hand. They all wore traditional dress: the menfolk covering their genitals with ‘koteka’ or penis-gourds made out of dried and hollowed out pumpkins, while the women, similarly naked from the waist up wore skirts woven from tree bark and thread made from vines. We were told that traditionally, bereaved members of the tribe would cut off their fingertips in order to show their suffering, and although the practice had died out in recent years, we saw a number of older women with shortened fingers.

Their principal diet is based on sweet potatoes, bananas and, occasionally rice and root vegetables, and, on very special occasions such as feasts or celebrations, pork.

Before we set out for our first day trekking, I was anxious. It was my first time on such an adventure and I was unsure if I’d be able to keep up the pace. In the end, with a little, or being honest, a lot of effort, I made it through.

Our expedition through the Baliem valley lasted several days. We crossed rivers on dangling rope bridges, and in some of the remote villages we passed through, attended their traditional celebrations. By night we slept in simple shelters, accepted by the tribespeople, in the heart of the wilderness.

Bali, Lombok and the tsunami

After our adventure trekking through the jungle, we took a flight to Bali, and after a night’s rest, took another flight to Lombok, a smaller island just off the coast. The date was the 26th December. We spent a day there, snorkelling and sunning ourselves on the beach, before catching a flight back to Bali the next day. I remember the weather being tempestuous and rainy, which struck me as strange as it wasn’t typical for the time of year.

It was only when we got to the hotel and saw the news that we realised the magnitude of what had happened. An earthquake on the island of Sumatra had created one of the most devastating tsunamis in history; with approximately 300,000 dead across Sri Lanka, India and Thailand. Bali, was relatively untouched and we were safe. Hundreds of thousands of others were not so lucky.

The last few days of our adventure were spent on the island, first in the interior of the country around Ubud, and finally on the coast. With its rice fields, at least 10 large temples of note, good food, markets, furniture shops and vibrant local culture with its ceremonial dancing, Bali is a fascinating Island. It also hosts several luxury resorts, where you can be pampered to the highest level.

Our great adventure ended in those first days of 2005. To this day I remember it as a journey filled with emotions where I learned more about myself, and how one’s’ imagined limits are barriers to be pushed and transcended. On this one trip I was able to observe some of the last remaining orangutans in the wild; cohabit with tribes where we shared in their traditions and everyday life and visit countries where different religions live side by side in harmony. But above all, apart from the exciting differences in food and culture, what I loved most about the experience was the open and kind nature of the people we met wherever we went. Because one thing that all Indonesians have in common, is that they always receive you with a big, big smile. 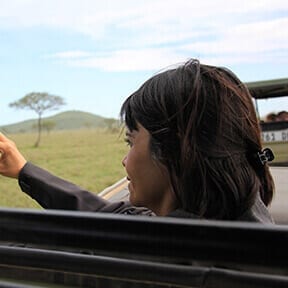